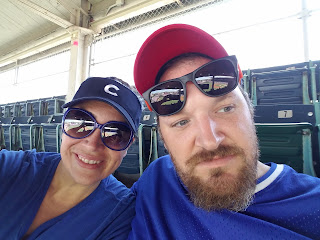 If there is a shining light in Indiana for the wary tourist who does NOT care about Indiana sports, that light is the vast selection of craft breweries sprinkled pretty substantially throughout the state. Breweries are often bustling joints where beer tourists and locals sit next to each other, swap stories about where they are and where they’re from, and drink copious amounts of signature brews. I love visiting breweries – I love tasting new beer – I love doing these things with my agreeable husband (I do not love doing them with my disagreeable husband!) That’s what we did this weekend, with an all-too-brief interlude into Chicago for a Cubs game with our best good friends The Fosters!

This was an epic turn and burn, a road trip packed into 48 hours, which spanned three states (technically), and included 5 breweries, a Cubs home game, a Pump House, and a Craft Brew and Eatery! 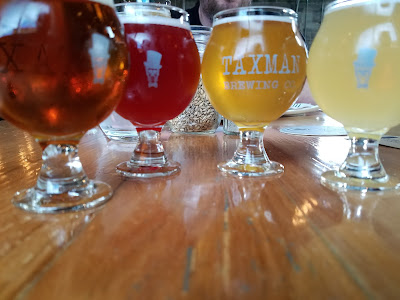 The first stop on our journey was Taxman Brewing Company in Bargersville, Indiana. At Friday dinner time, it was quite full, but still had no waiting for seating. It had what I guess is becoming typical brewpub decor: a mix of wood and metal, combining the asthetics of industrial modernity and a simpler time full of wood light fixtures and chalk boards. If Taxman didn’t have Edison bulbs in its light fixtures they may as well have. I think it is required for breweries these days. 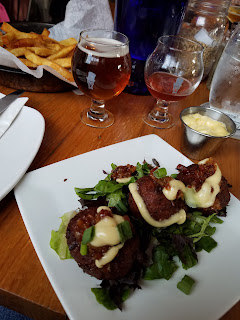 I like sours, and I have always liked sours. (I say this so people don’t think I’m new to the game – I’m legitimately a sour person – get it? LEGIT! Respect.) So, when I see sours on a beer list I gravitate instinctively towards them. Steve, on the other hand doesn’t go for fancy and new – he likes to try the tried and true staples – their money makers, essentially. Also, I like to get the flights so I can try as many of the new beers as possible, while he likes to get pints – but as many as possible. One of us likes to save money – the other thinks it grows on trees! 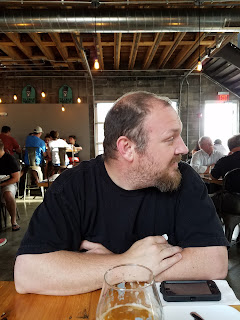 Anyways, the beers I was most impressed by at Taxman were the Clemency Gose (which had just the right amount of salt, as far as I am concerned), the Spin-Off Sour Ale (which I appreciated mostly because it wasn’t very tart), and the Grapefruit Hibiscus Spin Off (because the HIBISCUS was AMAZING!) The Syn-Tax just wasn’t my jam, but that’s okay. The food was TOP NOTCH!  I had the crab cakes and I could eat those crab cakes every other day for the rest of my life and be totally fine.

We decided to stay overnight in Lafayette, Indiana, which is about halfway between Louisville and Chicago. We arrived at our second brewery of the trip, Lafayette Brewing Company, at about 9 p.m. Well, the biggest disappointment of the weekend is that  Here Come the Mummies was playing right next door and we didn’t have tickets – I mean, it didn’t matter much to me, but Steve looked a little sad by it. But, really – how could I have known??  Anyways, the beer…

I want to say only nice things about beer and the breweries because I really think that so many talented people are dedicated to every part of the process. Sometimes, you simply don’t like the beers or the atmosphere, but that doesn’t mean they are not good – just not your style (which is why I start my ratings at 3.5 stars, generally). That’s kind of how I feel about Lafayette Brewing.

Located on the main strip of Lafayette, it’s interior defies expectations of the modern, hipster brewery. It was all wood. There was a wooden Purdue Pete keeping eye on the dining room. There was wood panelling, tables, chairs, floors, and so forth. And that isn’t bad, but it could be updated – it felt like it was stuck a little too firmly in a 1970s hunting lodge.  The beer, too, was a little hit or miss for me. Their golden stout, The Ghost of Henry Walters, had a huge coffee finish which I found a tad overwhelming. I enjoyed the sweetness of the Angus Macker Hardy County Oatmeal Stout, and the raisin and dried cherries in the Freedom! Scotch Ale. It’s rare, but my favorite of the brewery was their East Side Bitter, an Extra Special Bitter with yummy caramel and a smooth finish. 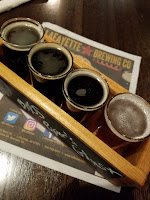 The most disconcerting image we were left with were the two 30-something adults sucking face at the bar right next to us – and I don’t mean just kissing or snuggling or nuzzling or whatever weirdos do in public. I mean we heard kiss sucking sounds – it was making everyone uncomfortable and the only reason I can see that they didn’t get kicked out is because they weren’t displaying their weird horniness in front of small children! It momentarily put Steve off of his Duck Sausage Flatbread – but he still managed to duck on down and got him some! 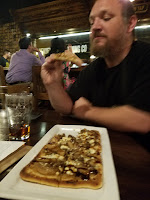 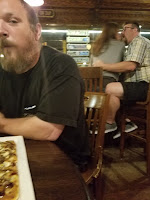 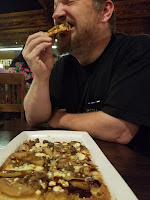 We woke up super early the next morning so we could drive out to the suburbs of Chicago to meet up with our friends Ryan and Krystal. They were in town for the Open Air Festival, but took a break from the heavy metal for a nice day squished together in the cheap seats at Wrigley Field!  Steve loves the Cubs. I love Rizzo. The Fosters love sports. It was a pretty great day, capped off by the Cubs winning at home against the Rangers! Go Cubs Go! (RIZZOOOOO!) Our time with them was short, but where there is a will there is a way, and we were bound for more beer adventures. 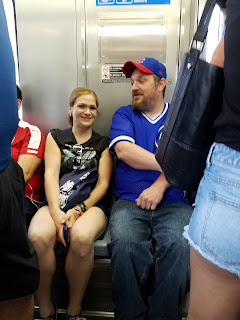 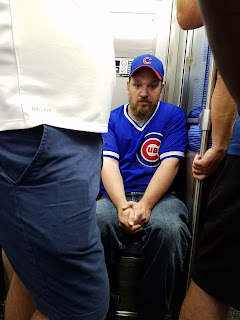 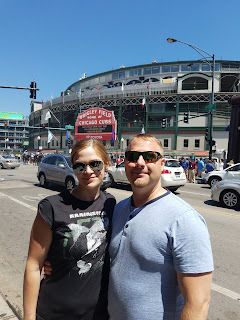 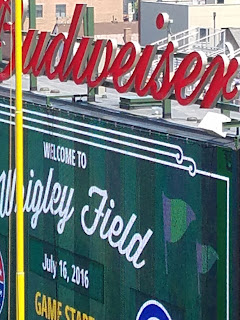 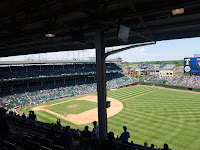 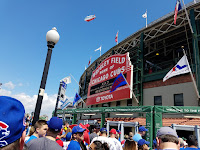 After dropping them off at the Open Air Festival, we got the hell out of Dodge, and found our way to Munster, Indiana where we intended to go to 3 Floyds Brewery. Well, that place had a line out the door about 15 people deep, so we skipped that and drove to Griffith, Indiana to New Oberpfalz Brewery. New Oberpfalz was small, dominated by metal tables and fixtures and local art. At this point, though, I was getting tired and I knew that I still had some driving ahead, so – SHOCKER – I only ordered one beer! ONE!  It was their Russian Imperial Stout with Coffee and Cocoa Nibs. It was very rich. I was like a liquid dessert in a 6oz snifter! I’m a little sad that I didn’t try more beer from this brewery, but there is always next time! We ate our dinner here, Smoked Bacon and Apple Grilled Cheese sandwiches with potato salad and slaw. It was delightful. 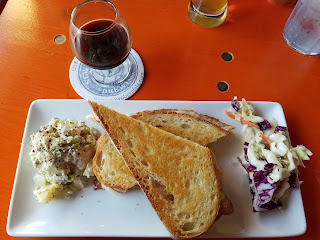 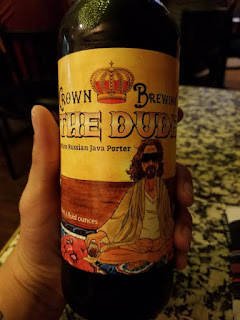 So, I only had one beer at New Oberpfalz because I knew we were going to keep driving. And, the final beer destination of the night was to a brewery I have been to a couple times before, Crown Brewing in Crown Point, Indiana. We stop here for one reason, and that is to pick up a couple bombers of their White Russian Java Porter: The Dude. We love The Dude, as we love all things Lebowski. I am never disappointed by the beer at Crown. This time around I had their Farthing English Mild Ale, which was very mild and palatable, and a really nice way to wind down the evening.

So, I kept driving. We wanted to get just a little closer to Louisville before calling it a night, but we finally stopped near Lebanon, Indiana and did the smartest thing we’ve ever done: we stayed at a Holiday Inn Express 🙂  I loved it. I will probably exclusively patronize Holiday Inn Express for a while – until I find out they’ve done something abominable against workers rights.

The next morning, we got off to a later start, but not late enough. We didn’t want to Pokemon Go around Indianapolis waiting for Planetary Brewing to open up, so we just drove through. We decided to stop by the Upland Brewery Pump House in Columbus, Indiana after much consternation and bickering. As far as we could tell, the Pump House is literally a converted pump house. It sits in the middle of Columbus, next to a river. The interior is as you would expect, but this one has copper as well as the basic wrought iron and wood and metal. If this place offered brunch, it would have been packed. What you don’t see in these pictures is the packed patio area and the well occupied dining room. 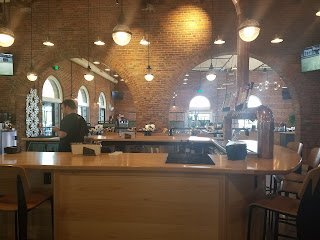 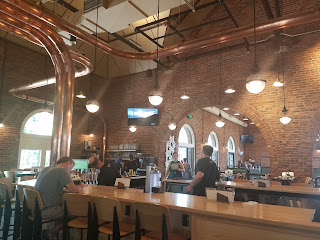 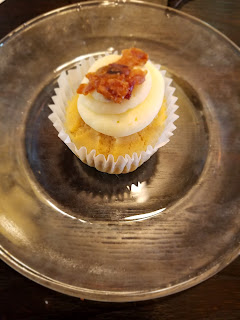 I tried three tiny samples of three beers. I loved the Crimson, which they describe as an “epic Flanders Red.” It had plum, red wine, and cherry flavors, and was aged in bourbon barrels. I don’t generally like bourbon barrels, so I was very happy that this didn’t have an overwhelming bourbon flavor. But, the ABV was 10% or something, so I couldn’t have a full pour of this if I wanted to keep driving. So, I also tried the Marion the Agrarian, which is a dry-hopped saison sweetened with local honey – I liked it so much I had a pint of it. Sadly, I thought their sour, Basis, was just a little too basic. Also, I didn’t like the cupcake. But I liked the candied bacon on the cupcake. 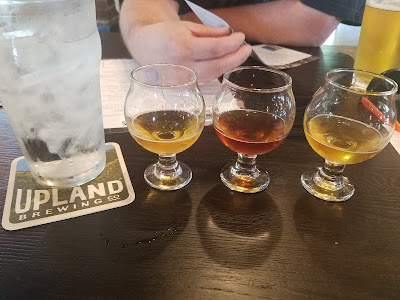 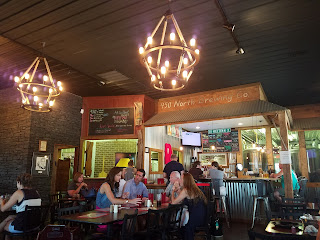 Going in the opposite direction, we decided to try 450 North Brewery next. It is attached to Simmons Winery out in Columbus, Indiana. Their pizza looked delicious, but we didn’t purchase any. I had only had one beer from 450 North, their Honey Kolsch, and I was not a fan (which I found out again because I ordered it on tap with the same conclusion). But, they had my hands-down favorite beer of the whole trip, the Barn Yeti Belgian Winter Ale.  OH. MY. GOODNESS!  It was so good I went immediately to their fridge and got a 4-pack to take home. It was roasted chocolate, oak,  vanilla heavenly perfection – and I don’t plan on sharing it with just anyone! They also had some fantastic ciders! A Pineapple Habanero and the Legendberry were very good. Surprisingly, I did not like their Russian Imperial Stout, and their Emerald Elixir tasted like Apple-infused water. 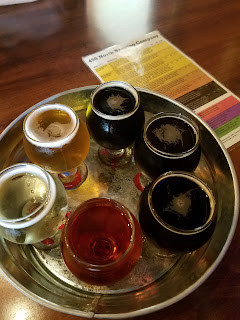 Well, that was our last brewery of the trip, but we weren’t quite done. We made our way all the way to Seymour, Indiana to a place called Rails Craft Beer and Eatery. We thought it was a brewery. Google even identified it as a brewery, and you know Google never gets shit wrong. But, no. They serve regional craft beers but do not brew their own. We were okay with that. I had a Strawberry Blond Ale by Quaff ON!Brewing Company with my “I’m on a diet” supper of French Onion Soup and a House Salad.

The drive home was very quiet. Steve’s soft snoring competed rather passively with the radio. I was anxious to get home to my puppies, but it was a good trip made great by wonderful friends, some delicious beer, and the Chicago Cubs winning at home!

Cresant Smith is a native of Kentuckiana who thinks, talks, reads, and writes too much about beer. The only thing that rivals her passion for beer may be her love of hockey. She is a Cicerone Certified Beer Server and an occasional beer judge at the Kentucky State Fair. She has been a regular contributor to LouisvilleBeer.com since 2011. A self described “Beer Nerd” who loves to backpack, ride her motorcycle, and travel, especially when seeking out new brewpubs and searching for beers she hasn’t yet experienced! Contact me @ cresant@louisvillebeer.com. Follow me on Twitter @Cresant8 and Instagram @ louisville_beer_com

Leave us a VoiceMail